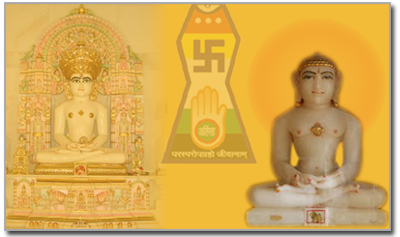 Jainism is one of the oldest religion of world. It believes in a cyclical nature of universe. Thus a universe without beginning, without end and without creator.

Rishabhdev, the first Tirthankar (Maker of the Lord) of this cycle of time, is mentioned in Rig Veda, the oldest scripture of Hinduism believed to be at least 5000 years old.

The last of the 24 Tirthankars of this cycle of time was Lord Mahaveer who lived between 599 and 527 B.C.E.

Ahinsa (Non-violence) is the underlying philosophy of Jainism. Ahinsa as taught by Jainism is very comprehensive and is concerned not only with Human beings but also all living beings, whether they are animals, plants, insects or microbes. Detailed description and classification of types of living beings and ways to minimise and avoid violence against them is given in thousands of centuries old Jain scriptures.

The objective of Jainism is to strive for Moksha or Liberation from unending cycles of Birth, Death and Re-birth. One who is liberated is called as Siddha. A Siddha is a soul which has achieved it's original state of infinite bliss and power etc. Every Jiva (living being) has the potential of becoming a Siddha and therefore God.

Jainism does not believe in God as the creator of universe. God is a liberated soul (Siddha) who has attained Moksha. A role model as well as a teacher. Every human being and every living being for that matter has the potential to attain Moksha and thus become God.

Philosophical principles of Anekantvad (Non-absolutism or Multi-sidedness) and Syadvad (Relativity of truth) are unique only to the Jain system of thought. Karma theory has its roots in Jainism and is thoroughly explained.

Jainism says that the future of a man is in his own hands. All Jain rituals, religious practises and beliefs are beneficial from a scientific perspective too. Ahinsa and Vegetarianism are preached and practised very thoroughly.

This site has been developed to provide quick announcement and services to worldwide Halari Visa Oshwal Community. The aim is to motivate, education & relief work and inform Oshwals of their cultural identity and richness of it. It is also hoped to reach out to all Oshwals and offer them services they can relate to and encourage and promote positive Oshwal identity as well as greater educational and understanding of being Oshwal.